These are more than just countries to Donna Hicks. Notorious for their political upheaval and turmoil, within their borders, Donna has sat between sworn enemies and dared to help them find common ground. Wherever there is an “intractable conflict” in the world, Donna and her team work diligently to facilitate dialogue between the disparate parties and find ways for them to work together. It’s far from easy, but over the past 25 years Donna has noticed a pattern emerge, helping her achieve better results with each conversation.

“I worked all over the world in many different conflicts, but while we were sitting at those tables and listening to how they were going back and forth about how to settle the political issues that divided them, it became very clear to me and to my colleagues that there was another conversation taking place in these negotiations. It wasn’t just about the political issues that divided them, but they were having an emotional conversation as well…finally, after several tries, I realized that what this was about…was really about their dignity.” 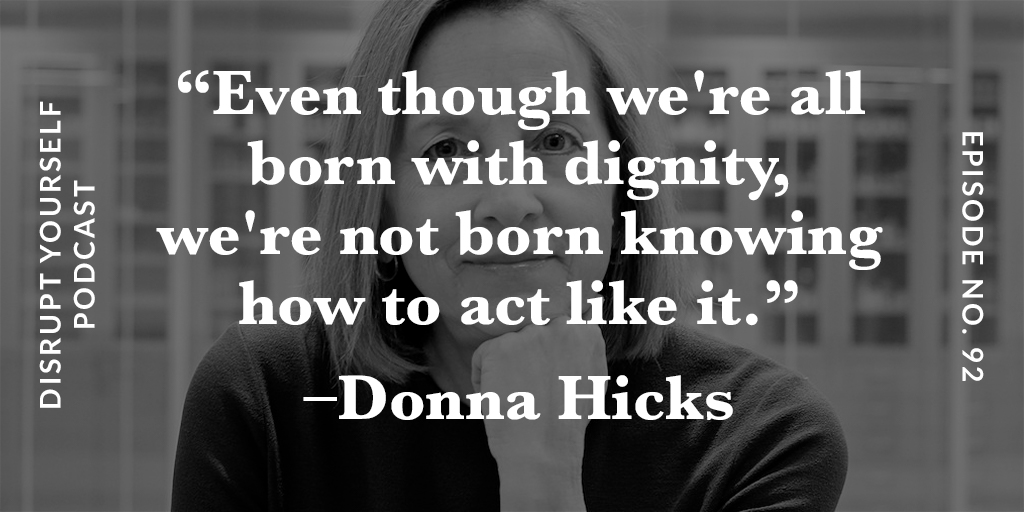 I love the word “dignity,” and after my conversation with Donna it has taken on an ever deeper meaning. Recounting amazing stories from war-torn countries, as well as thought-provoking comments from her students at Harvard University, Donna explains that we are all guardians of dignity, and we owe it to ourselves, others, and the greater good to educate ourselves in the inherent value and worth of everyone around us in order to flourish.

“Pure dignity…is central to the human condition. We all want to be treated with dignity, I think it’s our highest common denominator as human beings. Even though we’re all born with dignity, we’re not born knowing how to act like it. So we really have to learn this stuff, we really have to educate ourselves in some of the basic fundamentals about dignity.”

I can’t wait for you to hear one of Donna’s favorite stories from her time in Libya. It gives me hope that even when things look dark, when we choose to respect the dignity of others and connect with each other there will always be a light at the end of the tunnel. Listen to the story on the player below, or download the episode on iTunes. If Donna’s message resonates with you, please leave a comment. And if you haven't already, please subscribe using one of the buttons below. This year some of the Disrupt Yourself content will be sent to subscribers only, and I’d hate for you to miss it!