My First Child and Forgiveness

I made a BIG mistake last week.

Just days away from Belmont's 50th Annual Wreath Making Party, I realized that the 16″ wire frames for the wreaths hadn't been ordered.  As Vice Chair, it was my job to delegate this. I hadn't.

When I called the supplier we typically use, she had 200+ frames on hand, but we still needed another 80.  I did finally locate some, but at a much higher price, leading to a cost overage of $150.  A relatively small amount. I know. But the mistake was made because I'd been a bit lackadaisical, not fully showing up. Juxtapose my laissez-faire attitude with hypervigilance around the budget — I was ashamed.

I began to cudgel and berate myself even though The Chairperson was ever so gracious.  Had the roles been reversed, I would have let it go immediately.  A mistake.  It can be fixed.  That tends to be my approach with lots of people under lots of circumstances. 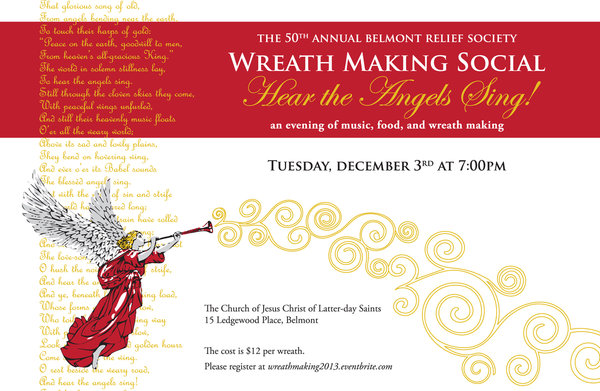 The more burdensome upshot of this situation was not that I don't forgive myself easily, but the realization, as I complained (again!) about my son's report card, that the people I forgive the least are my children, especially my oldest.

With the birth of a first child, I could project onto him my hopes and dreams; he was going to be anything I wanted him to be.  Instead, he's growing up to be who he is.  No child can ever compete with a parent's projection.  Some try mighty hard.  I was one of those.  Some say — no way.  And, as parents, try as we might, it's nearly impossible not to hand them our unlived life.

I don't have a good solution for peeling off this plastic projection, but I think I found the start of one last week.  Which is:

Take my son to lunch, then:
Don't admonish him– even once.
Ask him questions.
As if he is a person I've never met before.
Because he is – sort of.
Ask him what he'd like help with.
Because that's what I would do with a friend.

I have thought for much of my life if I could just be perfect, then things would be perfect.
Gradually I'm forgiving myself  — and others — for not being perfect.
But the real victory will be when I am willing to let my children not be perfect.
The more I get to know them, really know them, the easier I think it will be.