Our guest today is Gabrielle Blair, creator of the lifestyle blog Design Mom which focuses on the intersection of motherhood and design. Named a Time magazine blog of the year in 2010, Design Mom inspired the New York Times bestselling book Design Mom: How to Live with Kids. Gabrielle is also the co-creator of Alt Summit, the premiere summit for creative entrepreneurs and social media content creators that has been going strong for over ten years, with the next Summit set to begin on March 1st.

Gabrielle didn’t set out to change the world of blogging, but she did it anyway. It started out as a way to stave off post-partum depression after the birth of her fifth child; it was 2004, and blogging was just beginning to culturally take off. Using Tracksee (an early predecessor to Google Analytics), Gabrielle could tell that over 100 people were regularly visiting her blog, but she couldn’t get them to comment or engage with her.

“So I came up with this idea and I reached out to a high school friend of my husband's who had a little online shop called, Darlybird and I said, “Hey…what if I promote your shop and I do a giveaway?” Like I, the- the term giveaway didn't, wasn’t really a thing yet. But I said, “If I give this prize and they comment and that's how they enter to win.” And so, she agreed and we did it. And I believe I got 70 comments.”

Anyone who has followed a blog will recognize that this “giveaway” technique is now a common practice among bloggers. For Gabrielle, it was simply a way to connect with her audience. But within 24hrs, Gabrielle had other blog owners begging to use the giveaway on their own site, and before she knew it, Gabrielle had disrupted the status quo.

Similarly, when Gabrielle and her sister decided to create the Alt Summit (originally titled “Altitude Summit”), she was just looking to meet a need. Most online community events were geared towards “mommy bloggers” or writers of content, but Gabrielle, her sister, and her sister-in-law all had blogs that focused around design. It seemed natural to them that there should be a place for creatives to gather. That gathering is now in its eleventh year, and Gabrielle is finding new ways to keep the content—and scenery—fresh.

One of Gabrielle’s strengths that I really admire is that she is unafraid to play where no one is playing. She was an early adopter of blogging, and the topic she picked—everyday tips for designing your life—was untapped when she began.  It was just Gabrielle and Martha Stewart. Who would be paying attention? 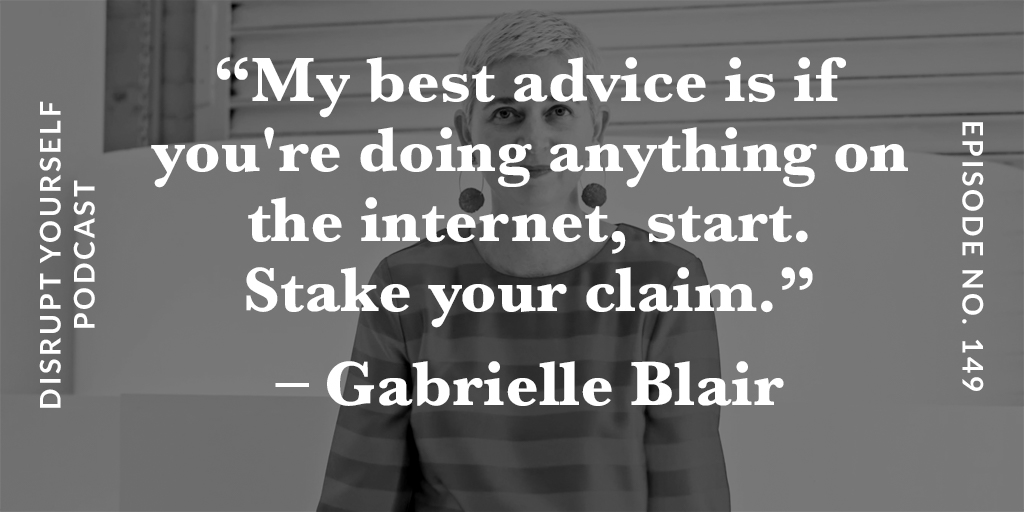 “[I]f you're doing anything on the internet…start. Like, stake your claim. Because no one's watching at first. So just get out there and start and have the website that's not quite perfect, or the Instagram feed that's not exactly what you wanted, but just start, because it's the internet. And you can go back and edit it, constantly.”

Gabrielle has such an interesting journey, and I’m excited to share it with you!