If you haven’t read Whitney Johnson’s new book Dare Dream Do, hot off the press only days ago, you should! The highlight for me is its inclusion of roughly 50 short personal essays on the topic of dreams, many submitted by women I admire from the Boston area, where I first met Whitney as well. The short stories, many no doubt composed in determined bursts during children’s naptimes or brief windows at work, portray candid snapshots of dozens of women as they reflect on choices in their lives.

In the spirit of discussion and book-club conversation fodder, I want to offer one counterpoint to a central thesis of the book, which is that women can make unfulfilled or amorphous dreams a reality through a series of what some might consider “selfish” acts—asking for loved ones to cede time and resources to support their ambitions, recasting themselves as the center of the story, ensuring that they attend to their own dreams instead of attending only to relationships, and so forth.

Surely the call for self-centeredness has merit insofar as it motivates women to live proactively as the heroines of their own lives, rather than sideline themselves as languid or captive observers of others’ heroic journeys. But this recipe for fulfillment has a hitch.

I’ve noticed that in some aspects of life, the harvest is greater for people who profoundly sacrifice self during the planting season and then wait it out during the hot summer sun. Caralyn Buehner captures this idea in her children’s book Fanny’s Dream. The heroine of this story is a sturdy girl named Fanny Agnes, who worked from sunup to sundown on her parents’ farm in rural Wyoming. “But she had her dreams. She was going to marry a prince.” Filled with excitement when she hears that the mayor is going to give a grand ball, Fanny dresses in her best calico and waits in the garden for her fairy godmother. 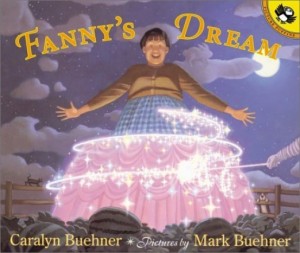 To her disappointment, the only person who shows up is her short but amiable neighbor Heber Jensen. He proposes marriage, and after an hour of time to adjust to the idea of giving up her dream of marrying a prince, Fanny accepts. So Fanny marries Heber. Together they plow the north field, plant potatoes, churn butter, and slop pigs. When the twins arrive, they take turns washing diapers and rocking babies. They survive a fire that destroys their house and they rebuild together.

One night Fanny goes to the garden to pick a melon. And who should show up but that decade-overdue fairy godmother. “Sorry I’m late!” the fairy godmother says cheerfully. “But there’s still time. There’s a visiting coronel at the mayor’s ball tonight. Just leave it to me, I’ll fix everything.”

Fanny looks down at her work-roughened hands, glances at the little house where Heber is reading to their three small children, and curtly refuses the fairy godmother’s offer. Her treasure is clearly not at the mayor’s ball.

As a child Fanny never “dreamed” of marrying Heber, washing diapers, and slopping pigs. Indeed, the decision to choose those options instead of her childhood fairytale was a response to a different motive. Perhaps it was fear of the unknown or a sense of practicality. But perhaps it was something higher, like a sense of calling or faith in the principle of sacrifice. Whatever the reason for her decision, Fanny’s gamble paid off. A decade later, she found that the fairy godmother and fancy coronel paled in comparison to what she had back in that humble farmhouse.

One of my friend’s mothers bailed on her family when my friend was nine. Another friend’s mom left the family when he was 13. Both moms abandoned family to find themselves and reclaim aborted dreams—to answer the fairy godmother’s call. I do not know the complications of either mother’s circumstances. But I do know that in the heat of the summer, with babies and bills and laundry, they felt unhappy. I bet Fanny had days she felt like that too.

Several of the women who contributed short essays in Dare Dream Do seemed to be using the wrong word when they talked about their decision to build their families in terms of fulfilling a “dream.” That’s such a wistful or idyllic way to conceptualize a hard-work, morning-sicknessy pursuit. Big picture, having a family is certainly a common dream. But on a day-to-day level, I bet most moms stay true more because of faith, commitment, and a long-term perspective than because no other dream is as dazzling to them.

This is not to discount the importance of dreams. Pursuing interests and talents is among life’s top joys, and I love the motivation that Dare Dream Do gives me to strive in those ways. But certain decisions deserve a different lens from the “Am I living my dream?” analysis. Otherwise we’re prone to miss making the types of investments that require a hot summer season of sacrifice and self-deferral to cultivate the harvest that awaits us in a later season.

Heather Staker is the mother of five young children and a part-time writer and speaker for the education practice at Innosight Institute, a nonprofit think tank that focuses on innovation in the social sector.  She received a bachelor's degree in Government from Harvard College and an MBA from Harvard Business School.