James Altucher: Disruption in the Face of Failure

What do you do when you fail and fail again?

You listen to what Linked Influencer James Altucher has to say, as I was able to do in a recent Disrupt Yourself podcast interview.

By his own accounting, Altucher has endured at least five career and financial setbacks so severe that he was literally left starting from scratch, reinventing himself and developing a new professional path on the fly, bounded by the constraint of depleted financial resources coupled with the pressure of time—bills to pay, family responsibilities to meet. Of the first, and most painful of these experiences he says, “We all live and die by metrics, for better or worse, and at the time I thought my net worth was my self-worth and my net worth was essentially zero.” 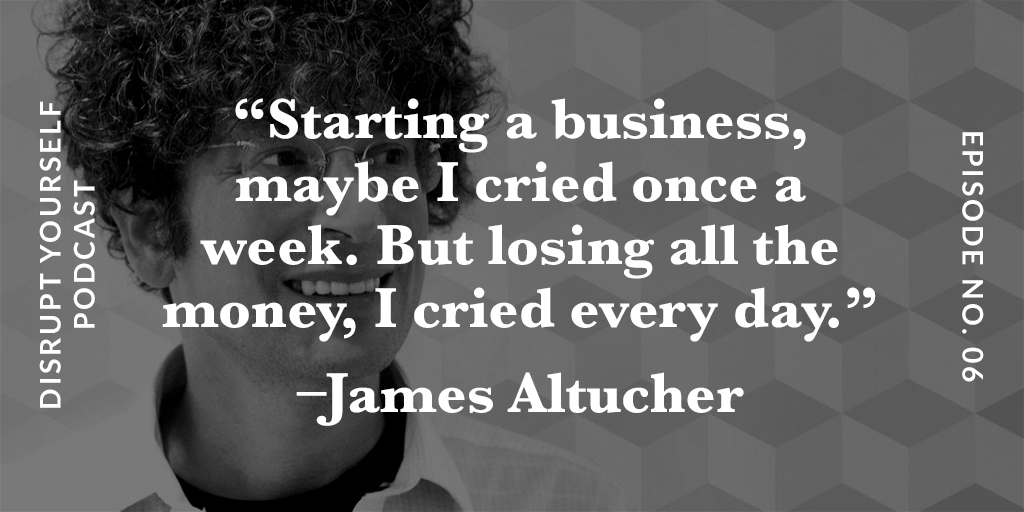 With time and repeated experience, Altucher has developed a different, non-financial metric by which he evaluates worth, summarized by these questions: “Am I physically healthy, am I around good people, am I still being creative, am I grateful for what I have?”

Fortunately for the rest of us, through his setbacks, fiercely difficult at times, Altucher has developed an authentic voice as a writer, a truth-speaking voice, laying bare his own failures in a way that others can connect to and be encouraged by. “That first bounce back was brutal and so what I hope with my writing…or what I hoped initially was by admitting that, it gives people permission to realize that ‘Oh, this has happened to someone else. It’s not like…my life is over.’”

I hope my writing gives people permission to realize, ‘Oh this has happened to someone else.'”

His ability to speak so honestly is a distinctive strength, and one which many people appreciate as a voice in the wilderness of their own failures, setbacks and personal disruptions. But Altucher wants to be honest enough to speak the truth even if others don’t like what he says; he sees the need to please others as a potential obstacle to stepping back to grow: “I’m afraid to admit that I need some sort of external validation. And I think that’s part of taking a step back….I need to take a step back from that external validation to pursue something new.”

Our conversation strayed to Bob Dylan, recent recipient of the Nobel Prize for Literature. Dylan, Altucher explained to me, had to battle through more than one difficult setback in his career.

Early on, Dylan shifted from acoustic folk music to electrified rock, alienating his early fans who booed him as he performed in festivals and concerts. Twenty years later, when his popularity was at low ebb, and perhaps his creativity as well, he reenergized his career by innovating his musical style again, jump starting the poetry again. The key, claims Altucher, is that Dylan was true to himself. He was removed from the need for external validation. That drive to be original, authentic, even when it was initially unpopular, is, in Altucher’s opinion, why Bob Dylan is now a Nobel Laureate.

As I listened to Altucher talk about his writing and other facets of his work, I was reminded of an aphorism coined by the late British literary critic, Cyril Connolly, “Better to write for yourself and have no public than to write for the public and have no self.” For any of us looking to disrupt ourselves, stepping back to grow, it is worth considering that the greatest contribution we can make, and perhaps the most remunerative one as well, is to put our distinctive strengths to work and be ourselves.

As James Altucher has concluded, “I figured the deepest mine I could go down is what’s happening inside myself.”

That’s where your gold is.

You can eavesdrop on my conversation with James Altucher by listening below: