Katherine Preston | Out With It

Katherine Preston reached out to me after discovering Dare, Dream Do on Togather,  I, of course, knew of Katherine because Jonathan Fields had interviewed her for Good Life Project.  Learning that Katherine had just published a book, I immediately asked if she might share her story with us.  Read and be inspired.

After a lifetime of stuttering, my days are still marked and measured by my ability to connect. Every conversation with every new stranger plays out like a dance. At best, the jerks, bursts and silences of my speech are met with steady eyes and warm smiles. At worst they are met with frowns, averted eyes and laughter. My body reacts instinctively. Involuntarily I recoil as I sense the walls erect themselves around me protectively. I feel the familiar panic wind its way through my system. I force myself to stay in the moment, to smile, not to give in to the fear. I lean in towards whoever I’m talking to and force myself not to hide.

For a year of my childhood, the fear won and fled into silence. At 7 years old, I realized that I stuttered, that I was different. I may have been bubbling my words forward for years beforehand, but at 7 I became aware of the way the world reacted to me. I quickly learned that stuttering was so much more than the simple act of blocking on words or repeating syllables. It was linked up with our need to connect, to get validation from others and voice our options. Speech was the bedrock of our communication and I saw my difference as an embarrassment, and a target.

To safeguard myself I changed my personality. Mute I was normal and I embraced silence with a melancholy passion that sent me running home from school and left me eating alone in the playground. I made frantic pleas to a God I wasn’t sure I believed him. I promised to do anything, to be anything, if only he’d let me rejoin the fluent world.

After a year of self-imposed isolation, when my prayers weren’t answered and speech therapy wasn’t able to fix me, I decided to rejoin the world on my own terms. Recoiling against the taboo label of stammerer, or stutterer, I brushed away anyone’s concern. I was fine, totally fine. My stutter was no big deal. Just a slight nuisance. I built up my own walls. I embraced denial life as a lifeline and clung to it fervently. I believed that if I ignored it, then everyone else might do the same. I believed that I needed to compensate, to be the best friend I could be, the best student and the best daughter. I needed to force everyone to see beyond it, to out run the stigma of it.

So I devised ways to hide my speech, tactics that could momentarily trick my stutter into submission. I could circumvent a dangerous word, replace it with an easier word or an easier sentence, at a moment’s notice. My sentences became overly obtuse and circuitous. I felt my spoken words drift away from the succinct language of my thoughts. And yet I believed that I was winning, beating the stutter. I never considered that others could see what I was doing, I never imagined that, by hiding my words and acting a part, I was building increasingly impenetrable walls around myself. 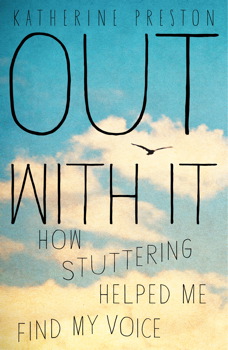 Privately I worried about the course my life would take, I feared that all the dreams I had for myself might not come true. To the rest of the world I appeared unfazed. I graduated from college and, after a brief stint in journalism, I ended up in a suitably sensible job in asset management. Finally, by the age of 24 I felt trapped in the life I had created for myself.

So I decided to face my biggest fear and find my cure. I handed in my resignation and set off on a year-long adventure. My plan was to interview hundreds of stutterers, speech therapists and researchers. To immerse myself in stuttering, to write a book and, along the way, to perhaps find some way to fix myself.

As I interviewed stutterers around the country I found myself drawn to those who spoke unapologetically, those who smiled and relaxed as they stuttered. I leant towards them as they told me about their lives, about their fears and their successes. I became jealous of their honesty, of their frank vulnerability. Rather than hiding their speech they were playing with it, treating it as a game rather than a war.

Gradually I felt myself take on their bravery. I felt myself laugh at all the awkward situations that stuttering trapped me into. I spoke to my parents about my stutter, I mentioned it to my friends and to strangers. I stopped trying to hide it, or fix it, and rather I began seeing it as some vital part of myself.

It is still easier to connect on the page. Easier to revel in the joy of words revealed in the rhythm and cadence that I intended. It is still a struggle to encourage others to see beyond the stutter, to bring them in, to relax into my unconventional voice. But I am more aware of the relationships that my stutter fosters. The way it brings out the best and the worst in others. For all those who walk away or frown or laugh, there are others behind them who reach out. Those who tell me of their struggles, of their worries and their dreams. For all of its difficulty, stuttering takes my conversations, and my relationships, to a level I’m not sure I would reach otherwise. For that, I am immensely grateful.

What have you stopped trying to hide or fix, and instead see as a vital part of yourself?

Katherine Preston is a British author and public speaker living in Brooklyn, NY. Her first book, Out With It: How Stuttering Helped Me Find My Voice is being published by Simon & Schuster and will be released on April 16th. Her memoir charts her transformative journey to understand and embrace one’s self, and the voice within.  You can follow Katherine on facebook and twitter.