Seemingly incongruous, these two ideas permeate Michael Bungay Stanier’s disruption of the professional coaching model.  Michael is the founder of Box of Crayons, a training company dedicated to coaching managers and leaders “in ten minutes or less.” He is the author of five books, including The Coaching Habit, which has sold almost 300,000 copies and spawned an accompanying podcast.

After years of listening to friends talk about their “angsty teenage life,” Michael realized that he had a gift for listening and decided it was something he wanted to pursue. Gaining education, experience, and some basic counseling training, he boldly opened his own coaching practice—and then dismantled it.

“I dismantled my coaching practice because, for me, the greatest fulfillment I get in the work I do is actually not by coaching people directly myself, but it's about being a teacher around how to be more coach-like…I'm pretty good, but I wouldn't have said that I was totally brilliant at this. But I can write a book like nobody else can write and I can design a program like nobody else can design, so let me put my higher skills to their best use.”

Michael took the time to not only disrupt himself but the coaching profession as a whole. Annoyed with how coaching had become an “elite experience” for the wealthy, he questioned the fundamental principles behind why we coach.

“How do I democratize coaching? How do I make coaching not a profession but a way of being with each other?”

Stripping away any assumptions he had about coaching, Michael found that, in practice, it can be very simple. By asking a Focus Question, a coach or manager can help their team member pinpoint what problem they are facing, and by being “lazy”— holding back, being curious, and not jumping in with advice—managers can further help their team member find their own solutions without feeling like they are being told what to do. 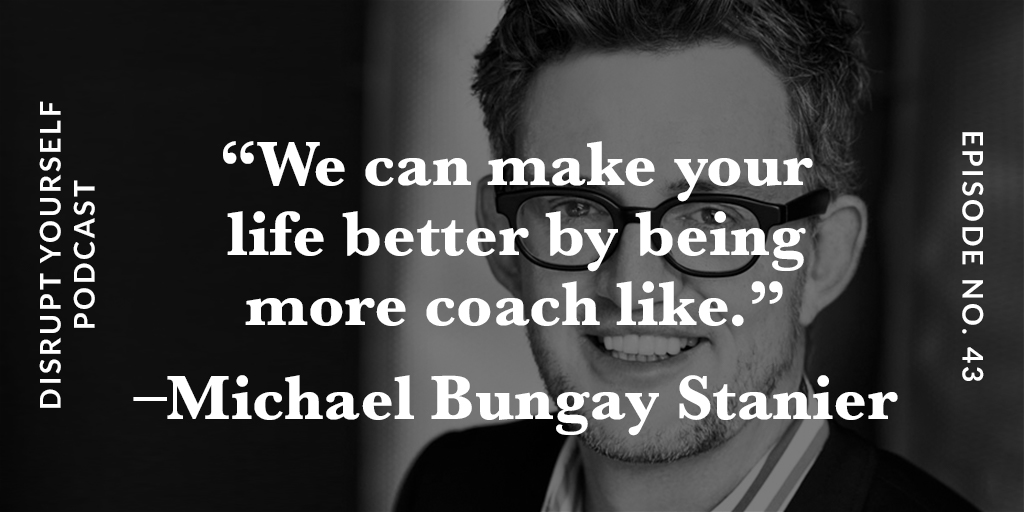 “It's not about giving up control, it's not about not having your people's back, it's about…can you slow it down? You still maintain control but you're giving up the in-the-moment control to increase engagement whilst still controlling the art of the conversation.”

What focus questions can increase engagement and unlock solutions? Hear Michael’s suggestions on the podcast in the player below, or by subscribing on iTunes.

Do More Great Work: Stop the Busywork. Start the Work That Matters. by Michael Bungay Stanier

Building a StoryBrand: Clarify Your Message So Customers Will Listen by Donald Miller