The Hereos The World Needs

“Silence in the face of evil is itself evil: God will not hold us guiltless.
Not to speak is to speak.
Not to act is to act.”

So said Dietrich Bonhoeffer, a WWII-era German-American Lutheran theologian and vocal critic of the Third Reich. Bonhoeffer left the safety of the United States and went to Germany to fight the evil in person, where he was confined to a concentration camp and ultimately executed by the Nazis.

From 1791 to 1917, much of modern-day Ukraine was part of a western outpost of the Russian Empire known as the Pale of Jewish Settlement. Here the Jewish people, banished from the rest of the Empire, lived out their impoverished and persecuted lives. Some suggest that the idiom “beyond the pale” originates from this; the Pale was the farthest extreme of the Empire. Anything beyond that was…well, beyond extreme. At one time, the Pale contained the largest, densest population of Jewish people in the world; millions emigrated, and most of the remaining—countless numbers—lost their lives in the Holocaust, after which fewer than 200,000 remained in Ukraine.

Fast forward to this week when one of the descendants of those enduring few, President Volodymyr Zelensky, and his wife and two children, had the option to be airlifted out of Ukraine to safety. Instead, he said, we will stay here and fight. We will remain and lead.

When I heard him speak and watched many of his fellow citizens defending their lives, their liberty, their country, I thought, “These are the heroes the world needs right now.”

What can I do to support them?

I think of “upstander,” a term I learned from Kim Scott's work: “A person who speaks or acts in support of an individual or cause, particularly someone who intervenes on behalf of a person being attacked or bullied.”

Second, I think of the word compassion, defined by Brené Brown in her latest book as “The daily practice of recognizing and accepting our shared humanity so that we treat ourselves and others with loving-kindness, and we take action in the face of suffering.”

1. Give. The needs are and will continue to be great for humanitarian relief. Donate to reputable charitable organizations.

2. Amplify the voices of upstanders—Reshare inspiring social media posts with family and friends; anyone and everyone that you reach.

3. Pray for peace for both Ukrainians and Russians. This is a disaster for both groups, their loved ones at home and abroad. Even if you don't believe in God, from a neurological perspective, prayer focuses your magnificent mind on a single objective, helping you filter through what you might do to attend to it.

4. Don't watch too much news. Once you know what's going on, you can be cognitively and emotionally overwhelmed by the 24/7 news cycle. This tends to be debilitating rather than activating.

5. If you know people, even distant connections, who live in Ukraine or Russia or surrounding areas, or if you know individuals who have relatives in harm’s way, send them a text or an email to let them know you are thinking of (praying for) them.

6. Introspect. Is there someone in your personal or professional life whose boundaries you are crossing unfairly, without permission? Are there any ways in which you are trying to take what is not yours?

This week's podcast episode is from Dr. Ulcca Joshi Hansen. She is what I would call an education reformer, and she advocates for reforms I believe in – education that reflects not only deep, dynamic learning but also interdependence and community. 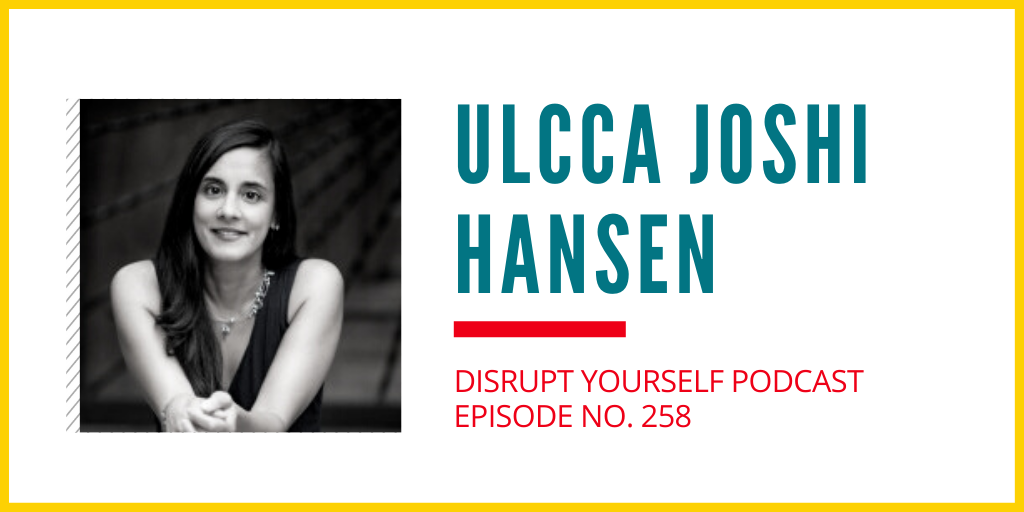 What are your thoughts? I'd love to hear. I answer every email.

What are you doing to be an upstander?

What are you doing to show compassion right now?

As always, so happy that you are here!

P.S. Join us tomorrow, Thursday, March 3, at 9:00 ET for LinkedIn Live. This week’s guest is Lindsay Mustain, SPHR, SHRM-SCP, a self-described ‘recruiter gone rogue.’ Her expertise is vital during this time of great aspiration. Bring your questions – we'll be heading to the audio portion afterward!