In today's episode, we will be discussing just one of the seven points of personal disruption: embracing constraints. All too often we find ourselves saying, “If only I had more time, more money, more health, expertise. If only Oprah were my fairy godmother, I could get something done!” And yet, when we take a moment to examine the role constraints play in the creative process and in our lives, we frequently find that they aren't a check on absolute freedom, but a tool of creation.

With me to discuss this topic today is Orson Scott Card, an American novelist who has authored 70 books (and counting), best known for his work in science fiction. One might think that such a prolific author has very little to worry about in the way of constraints, but Orson Scott Card disagrees.

“My favorite genre is romantic comedy or satiric comedy. But I never get to write that because, I have to make a certain income level, and the market for my work is generally within the science fiction and fantasy genre. When I step out of that genre, the sales are much lower. So, publishers are eager for books from me in-genre, and not so eager for books out of genre.”

Rather than revolt against this constraint, Scott embraces it, finding new ways to enjoy the genre that has earned him success by delving deep into characters he finds fascinating. He’s also found that understanding and adhering to rules within his books—whether it be magic or science—helps him identify what can’t or shouldn’t happen, and it is there that the most interesting stories are developed.

“[E]very time you create a magical rule, it carries with it the implications of dozens, maybe hundreds, of stories. Good stories. Because now you know who's going to be having problems, where the problems will arise, where the unusual person will be.”

Those unusual people have a tendency to take over his stories, and Scott has learned to follow his fascination and allow throw-away placeholder characters to emerge as individuals important to the story.  In his intensive writing workshops, Scott emphasizes learning structure and style over ideas, because he readily admits that the best elements of a story are never in the outline; you have to allow your unconscious mind to disrupt your plan and move in the direction the story dictates.

Scott’s advice for life is similar: don’t get too caught up in planning your career, because you never know what life has in store for you.

“There's a little laughter in the back of my mind whenever the word career is said, because I don't know that many people who have actually embarked on a career and followed the plan and had it work…career to me is a series of accidents, and you discover what your career was, looking back.” 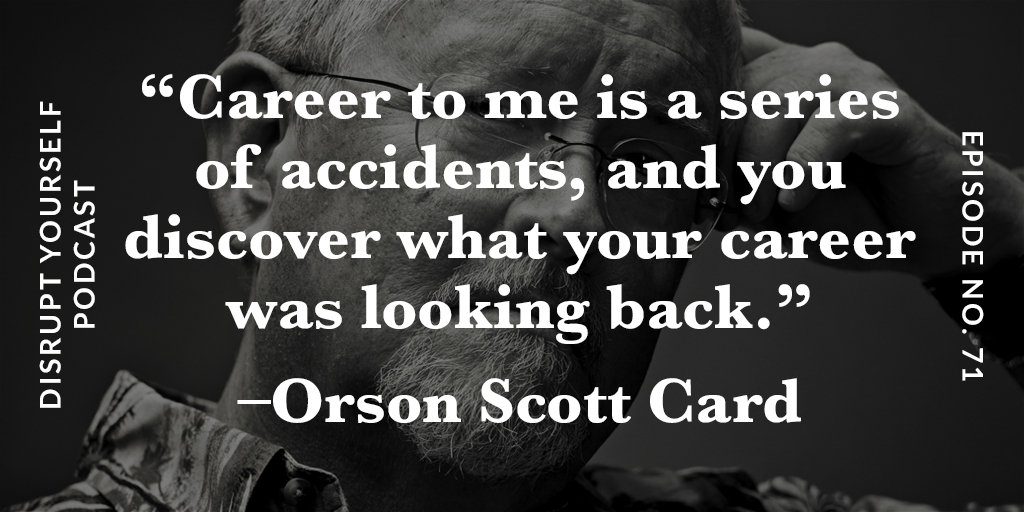 There are so many fascinating snippets from this interview that I would love to share, but my best advice is just to listen and enjoy.  If you haven’t read any of Orson Scott Card’s books, I recommend beginning with the Homecoming series—it’s my one of my favorites!

Listen to the interview in the player below, or on iTunes. If you like what you hear, please leave a review and it may be featured on a future episode.