Patrick McGinnis: How to Be a 10% Entrepreneur

Patrick McGinnis—venture capitalist and author of The 10% Entrepreneur—is my guest on the Disrupt Yourself Podcast, Episode 21 . He’s on a mission to ensure that anyone who would like to test the waters of an entrepreneurial enterprise without having to do a full swan dive into the deep end of the pool has the techniques they need to succeed.

“Quitting your day job,” he says, “And becoming a full time entrepreneur is a wonderful thing to do for a very small group of people. Most of us will never do that and that’s okay.”

A ten percent entrepreneur is what it sounds like: someone who commits ten percent of their primary resources—money and time—to an entrepreneurial effort. It doesn’t mean you aren’t fully committed mentally, but it doesn’t interfere with your ability to maintain a financially stable career, thus lowering the associated risks. It doesn’t require the same kind of all-in that starting your own business does. 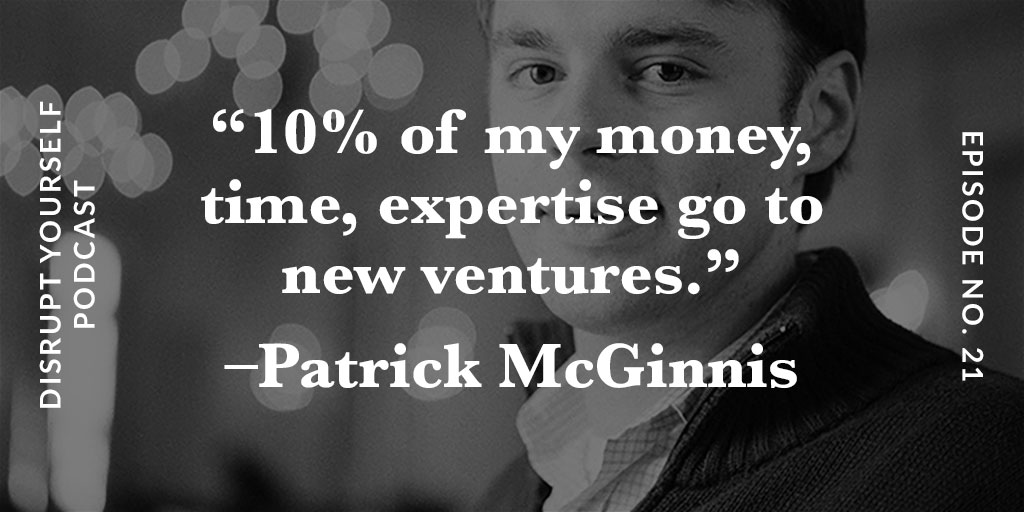 Patrick outlines five types of ten percent entrepreneurs. Maybe you’ll recognize yourself in one of these; I know I do. First, the angel, an investor of capital in exchange for a slice of the ownership pie; second, an advisor, offering time and skill to acquire sweat equity in a company. Third, a founder. This is the person who does start and run a business while still hanging on to that risk-mitigating day job; fourth, an aficionado, who puts ten percent into a passion project; and fifth, the 110% entrepreneur—someone who is already an entrepreneur and uses the ten percent to diversify into another project or projects.

My favorite story from Patrick’s personal ten percent experiences is this:

“A good friend of mine said to me, “I’m leaving my firm and I want to buy a company…just wanted to let you know. And I thought, ‘Okay, well that’s awesome; go do that.’ And then two weeks later I met somebody who—at a Christmas party—and he said, ‘Yeah, I just left my firm; I’m looking to buy a company.’ And they were both really awesome people so I just put an email out there. I said, ‘You know, I just feel like you guys got to meet.’ One guy’s in California; one guy’s in New York. Little did I know, three weeks later in some gruddy, terrible coffee shop in New York City, these guys met up. They got along and then six months later, I open my email and there is a stock certificate sitting in there. They gave me shares in the company they bought.”

While Patrick cautions that receiving stock in exchange for nothing more than an introduction is an exceptional case, he uses it to illustrate the reality that ten percent entrepreneurship yields results without a lot of time and money up front. Most of us can find a way to do this. And having done it once, we can do it again and again.

Listen below to the podcast here for more tips and detail, and read Patrick’s book. I wager you’ll find both inspiration and practical advice to help make your entrepreneurial dream a reality.

The Home of FOMO by Ben Schreckinger