When the Wright brothers completed the first sustained manned flight it was a pivotal moment in history. Travel, commerce, logistics, and world relations would forever be impacted by those 12 seconds in North Carolina, but to the people living at that time it was almost impossible to imagine or consider relevant to their lives. It took almost four years for the Wrights to receive any significant newspaper coverage, and it is only in retrospect that we can see how important those 12 seconds really were. It was an inflection point—the moment when everything changed.

My guest today is Rita McGrath, and she literally wrote the book on inflection points for businesses. These moments when the assumptions about your business change or become irrelevant are not always easy to spot, but, as Rita explains, they can make or break you.

“[S]trategic inflection points…cause huge, enormous changes, but not right away. And that's the strategic window of opportunity because if you can spot it early and decide what to do about it, it can actually take your business to wonderful new heights.”

Together with Ian McMillan, her research on discovery driven planning has had a significant impact on the way modern businesses view strategy and innovation. Twenty years ago, they conducted a series of studies into corporate flops where large ideas from seemingly successful companies ended in complete disaster. Rita and Ian began noticing commonalities between the different case studies, which in turn led to a realization of how to avoid these failures. 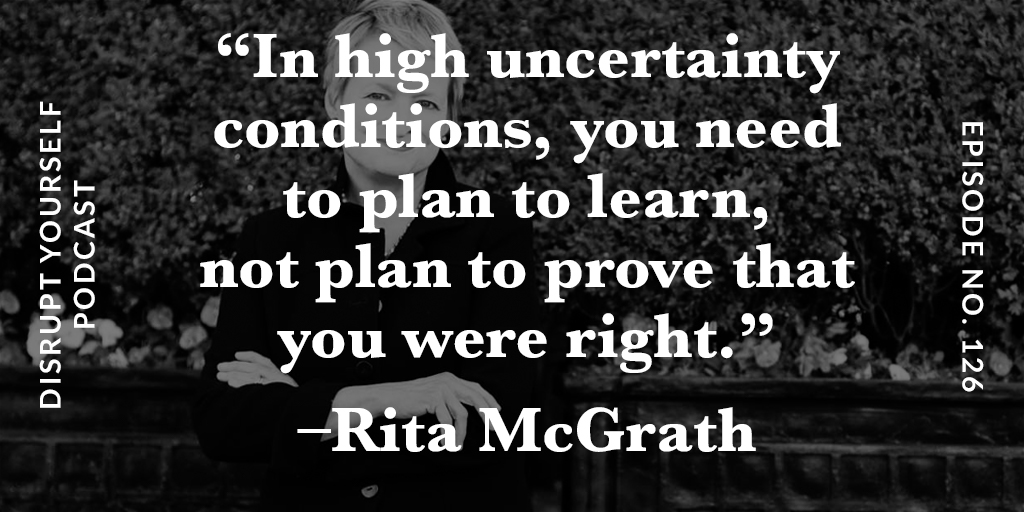 Their work has been featured in The Lean Start Up, as well as my own pantheon of publications—Build an A-Team, Disrupt Yourself, and Dare, Dream, Do. Clayton Christensen referred to their ideas as some of the most important management ideas developed, and I am honored to have Rita on the podcast with me!

There is so much to unpack here. Rita gives some great insights into how organizations can plan for the future, as well as how they can avoid the pitfalls of short-sightedness. Join us as we discuss why big ideas sometimes fail; how to spot inflection points; and what may be around the corner for American businesses.

Listen in the player below, or download the episode on Apple Podcasts. Let us know in the comments what you think, and what you see around the corner!