When President Kennedy announced in 1961 that he wanted to put a man on the moon by the end of the decade, it was a longshot. Some believed it to be impossible. However, on July 20, 1969, Neil Armstrong stepped out onto the surface of the moon and that “longshot” became a reality.

In January of 2011 President Obama put out his own “moon shot call”—in his State of the Union address, he announced the goal of 100k more science, technology, engineering, and math teachers in in the United States over the next 10 years. And not just any teachers: he wanted excellent teachers to help train the next generation of STEM students.

Talia Milgrom-Elcott remembers this speech vividly. It was a rallying cry that she felt deep in her bones. She knew it wasn’t enough to just stand and clap for the announcement (which received wide bi-participant support). Someone needed to do something—why not her?

“We hear these calls all the time, and we know to stand up and applaud, but they never get fulfilled. No one ever stands there in 10 years with a check mark saying, “we did this thing we set out to do.” And it was honestly one of those moments of feeling that this thing out to happen, and that this thing can happen. It’s a moonshot, but it’s in reach. We just don’t know how to quite do it yet. And so we need to build the road while walking it. And so I set out to figure out how to do it so that we could actually respond to this urgent call, but also, just maybe, have a chance of figuring out a blueprint for responding to other ones too.”

Wanting to be part of the solution, but knowing that she (and the White House) couldn’t do it alone, Talia invited about 30 organizations to begin contributing to this goal. If all these people were willing to step up, she knew she needed to create a backbone worthy of the effort. This needed to be more than a loose collection of individual commitments, and it became obvious that they needed “glue” to keep everything together. So Talia stepped up. 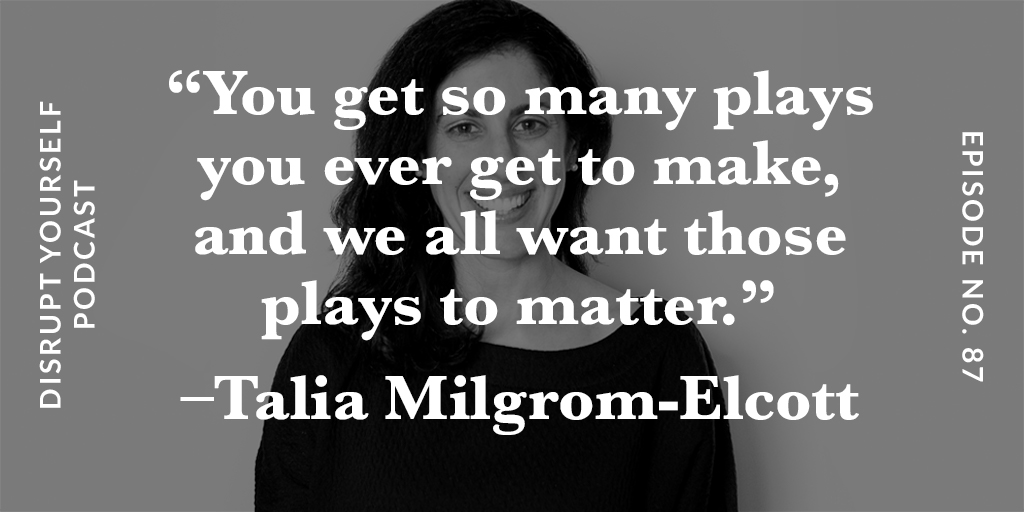 Now seven years into the challenge, Talia is proud of what her organization, 100K in 10, has accomplished, but it has grown far beyond the initial challenge issued in 2011. Talia now sees the problem for what it really is—not just a recruitment plan for new teachers, but an overhaul of education culture to make sure that we can retain excellent teachers.

“Sometimes you go about doing something and you think you know the why, and it isn't until you've gone out and done the thing that you can see its truer purpose…for the longest time, we've thought about schools as places where either the kids or the adults flourish, and not as places where for the kids to flourish, the adults need to flourish too.”

Now armed with a blueprint for identifying true problems worth solving, Talia’s team is ready to expand beyond the moonshot of 100K STEM teachers and create a moonshot of their own. I’m excited for you to hear about the amazing team that Talia has built, as well as her fascinating methodology for identifying core problems. Listening to her story is inspiring, humbling, and energizing. What “moonshot” are you willing to work for?

Join us as we discuss how Talia built her team, when she realized how true success would be measured, and the difference between fixing symptoms and solving problems. Join us in the player below, or download the episode on iTunes.