Our brains control almost all of our thoughts, emotions, actions and reactions. For instance, the thought of wanting to get ahead in one’s career originates in the brain. The actions that we take (or do not take) to turn that thought into reality are governed by the brain. But while all brains may be created more or less equal at birth, some people nourish and exercise their brains to make them grow stronger while others do little to grow the brain beyond its natural progression.

“To be an agent of disruption, first, we must become its subject, and that starts with understanding how our brains work.”

To learn more about how we can tune our brains for peak performance, I invited Dr. Tara Swart to speak with me on the Disrupt Yourself podcast. Tara is highly accomplished; she’s a neuroscientist (Ph.D.), a psychiatric doctor (MD), a senior lecturer at MIT and King’s College London, and an executive advisor to business leaders throughout the world.

Interestingly, Tara’s life is a classic case of self disruption. She was born in London to Indian immigrant parents who, stereotypically, expected her to become either a doctor or a lawyer. At first, she went along the path laid out for her, and became a doctor.

Then, in her mid-thirties, she thought, “This was never actually what I wanted to do, and I've never really thought about what I really want to do.” She recognized that she was on a good S-curve as a doctor, but that it wasn’t the right S-curve for her. She needed to jump to a new S-curve.

At first, she was nervous about giving up her comfortable career as a doctor, so she started having conversations with people who had changed jobs but was held back by the false belief that because she was a doctor, her options were limited.

It literally took two years for the pathway in her brain to build up to the point where she decided, “I'm going to quit medicine and do something else.”

So, Tara set out to disrupt herself from being a doctor to being an entrepreneur and building her own executive coaching practice, where she could use a lot of her skills as a psychiatrist. 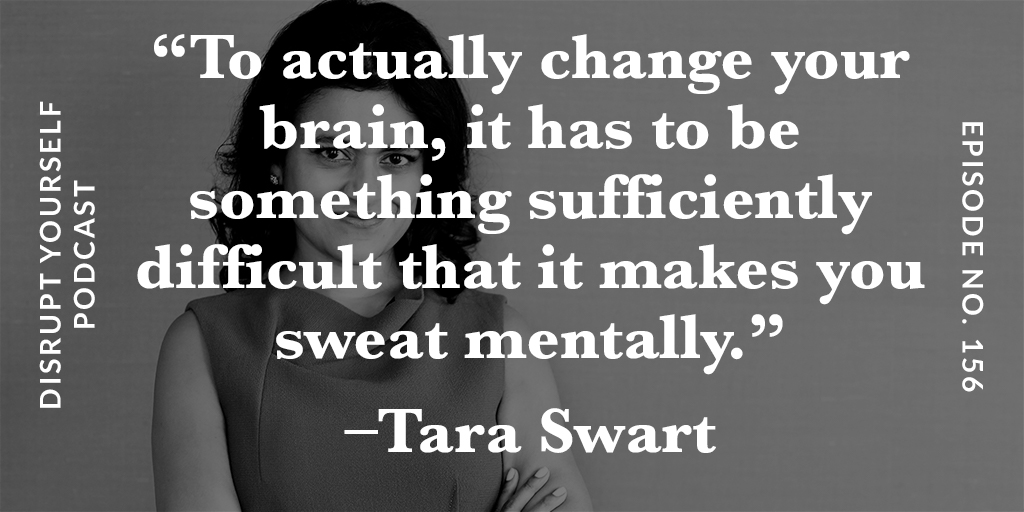 The transition wasn’t easy. She had a bit of an identity crisis at first, especially when she started to run out of money with no monthly paycheck to fall back on. But she was adamant about not going back to being a doctor even if she had to struggle. She was 100% committed to her disruptive move, and is happy that she never looked back when the going got tough. She attributes her ultimate success to luck, a lot of hard work, and “a very strong focus on just continually moving forward with the thing that I wanted to do.”

In conversation with me, Tara shares key actionable ideas that can condition our brains into achieving the things we most want – health, happiness, wealth, and love.