Today’s guest is Tom Peters, best-selling author of the groundbreaking book In Search of Excellence, which changed the way the world viewed the connection between corporate culture and the success of a business. His newest book, The Excellence Dividend, is likewise original, commanding, and cutting-edge.

Takeaways from the episode:

Forty years ago, Tom was tasked with creating a last-minute presentation for a client after a computer failure wreaked havoc on his company’s original plans. Not wanting to disappoint his wife, who had tickets to the San Francisco ballet that night, Tom delayed working on the presentation until after watching what he describes as a “mesmerizing” performance. After returning home, Tom couldn’t get what he considered the “excellence” of the performance out of his head and began wondering why that word—which is so often associated with artists, dancers, and even sports teams—was never associated with business.

“[I]t’s not that I was off to the races. Nobody took it seriously. The skies did not part. But…it just kind of got stuck in my head because we all love excellence.”

Despite naysayers (of which there were many), Tom’s idea resonated with his audience and continued to evolve, leading a few years later to the publication of In Search of Excellence, which has been regarded by some as one of the most influential business books of all time. 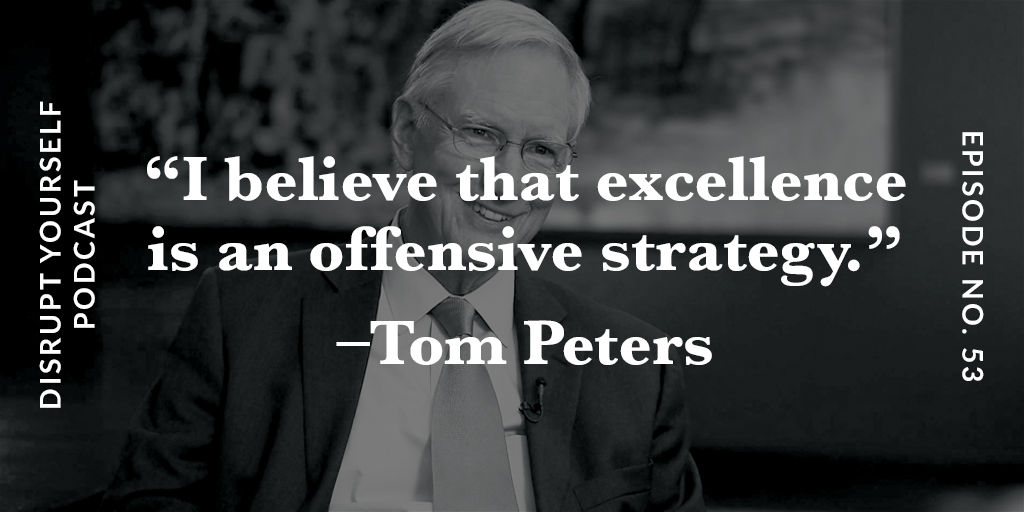 Join us as we discuss his professional journey, the importance of studying, and, naturally, what it means to be excellent. Listen to the full episode below or on iTunes, and if you enjoy the show please consider clicking here to leave us a review.

Links from the Show and Transcript

In Search of Excellence: Lessons from America's Best-Run Companies by Tom Peters and Bob Waterman

The Excellence Dividend: Meeting the Tech Tide with Work That Wows and Jobs That Last by Tom Peters

Quiet: The Power of Introverts in a World That Can't Stop Talking by Susan Cain

Leave a review for the Disrupt Yourself Podcast