Vala Afshar, my guest on the Disrupt Yourself podcast, is here to answer the burning question:

What is a Chief Digital Evangelist?

For starters, that’s the role Vala fills with Salesforce, the dominant player in the sphere of CRM technology.

He also explains CRM, for those who may still be unfamiliar.

Vala spent almost two decades with his previous employer; Salesforce is only the second company in his career. So he’s a little different than many of my guests, who’ve disrupted themselves again and again. But he began his relationship with Salesforce when the company was a four-year old just starting to explore its space. When it was, in fact, poised to be a classic disruptor—a silly little thing tickling at the fringes of a market that was dominated by tech giants like Siebel and Oracle.

“Twenty years ago the conversation of moving your most sensitive data, your customer data, your partner data…outside the walls of your business. Those were spirited conversations. In fact it took many, many years for large organizations to recognize that there is scale and security and skill and agility that comes with cloud computing….And now it's a multi-hundred billion dollar industry and companies are very quickly migrating to cloud because speed is the new currency in a digital economy and cloud gives you speed.”

Vala, with his prior company, was an early Salesforce customer. He used Salesforce and innovated with it for years before he went to work there. He became “the first evangelist hired at Salesforce, so it was new territory.” 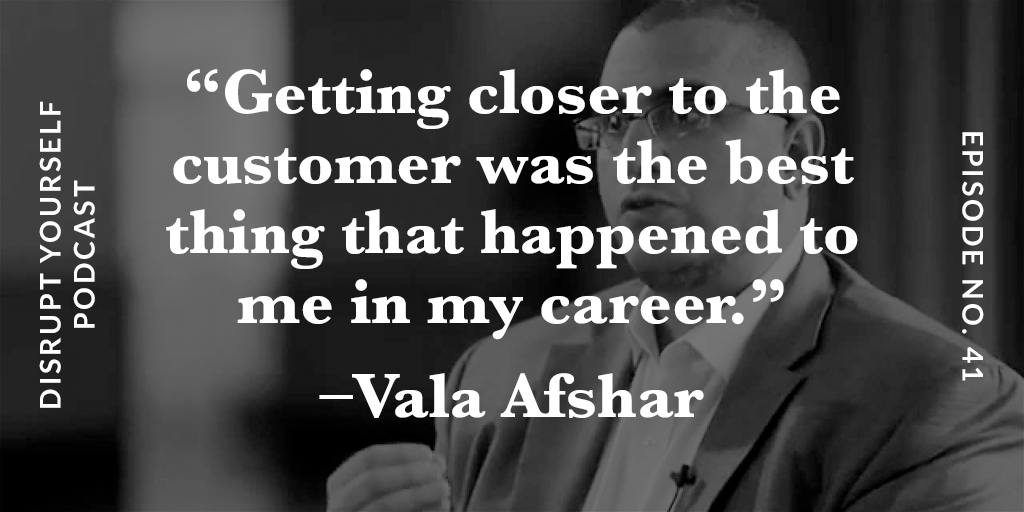 In fact, says Vala, “I expressed interest and they created it…. It started with my tweet that ‘Look I've been a customer for a long time and I would love an opportunity to learn if there's an opening in the future.’ Again, it wasn't searching the web site employment page looking for you know a match. To be honest with you, I didn't even know, I wasn't sure where I wanted to go. I started in engineering and then I ran service and support. And the last four years before joining Salesforce I was a chief marketing officer. And the company Salesforce was growing fast enough that there were opportunities – senior level opportunities – in R&D, in sales, in marketing, in customer service and support. So I didn't really know what I wanted to do when I grow up.”

In addition to all things Salesforce, Vala talks about this—the nontraditional job search, and the nontraditional candidate vetting. His insights into how savvy, forward-thinking companies will be hiring in the future is worth a listen too; have a listen below or on iTunes.

Behind the Cloud: The Untold Story of How Salesforce.com Went from Idea to Billion-Dollar Company-and Revolutionized an Industry by Marc Benioff